The Collapsing Cosmos, Part 2: Tolkien, the Rabbit, and the Redeemer 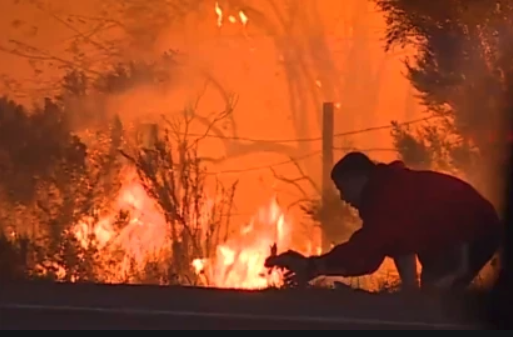 As bushfires raged in Australia, viewers around the globe watched with trepidation the news story of a shirtless woman in sandals running toward a badly burnt koala clinging to a tree. The koala had just scrambled through the burning brush trying to escape the inferno. The woman, who’d taken off her shirt to wrap around the wounded creature, carried him to safety, doused him with bottled water, wrapped his bloodied body in a blanket, and drove him to a vet hospital. A collective cheer rose in all of us upon witnessing the heroic triumph.

Two years ago, a similar wave of celebration circled the globe during the devastating fires in southern California. Harrowing footage showed a young man at the edge of a highway saving a rabbit from certain death in a massive wall of fire.

The rescue of the rabbit and the koala affect us so deeply because they portray something we all long for – a happy ending. That we find these tales of rescue so gripping implies that we identify, at least on some level, with the creatures caught in the grip of impending catastrophe. We experience vicariously their fear, feeling it in our very bodies as our adrenaline spikes and our hearts pound. When the longed-for rescue at last takes place, we burst with relief, and then joy.

J.R.R. Tolkien, author of The Hobbit and The Lord of the Rings, had a term for that moment of triumph. He called it “eucatastrophe” – the point in a story at which certain disaster is overcome and its would-be victims delivered. That momentous instant, when good triumphs over evil, imparts to the reader profound joy: a catch of the breath, a beat and lifting of the heart, near to (or indeed accompanied by) tears. Happy endings were important for Tolkien, and he endeavoured to provide them to his readers.

The Bible, too, is dotted with dramatic, triumphant rescues – happy endings involving humans, animals, and a prototype redeemer who saves them from overpowering elements, then brings them to a place of safety and new beginnings. Noah saves his family and an ark-load of animals from the global deluge that wipes out the wicked of the earth. They emerge atop Mt. Ararat, from whence human and animal life begins anew.

Moses saves the Israelites from the murderous Pharaoh, guides them through the Red Sea to solid ground on the other side, and leads them on the quest for the Promised Land. And the animals? Yes, they’re there too. One of my favourite lines in the plague sequence comes after the ninth plague, when Pharaoh agrees the Israelites can leave, but tries to guarantee their return by forcing them to leave their animals behind. Not one hoof shall be left behind! answers Moses (Exodus 10.26).

Likewise, Joshua, Moses’ replacement, miraculously leads the Israelites – the men, their wives, their little ones, and the flocks of each tribe – through the Jordan and into the Promised Land.

These rescues are prototype redemptions, and they don’t end with the Bible. The woman saving the koala, the young man saving the rabbit, and the many other stories of heroic rescue that move us so deeply demonstrate that the archetypal redemption narrative repeats itself over and over again in real life. As Karen Armstrong said in the quote with which I opened part one of The Collapsing Cosmos, traditionally, a myth expressed a timeless truth that, in some sense, happened once, but which also happens all the time.

What is the timeless truth to which these recurring prototype redemptions point us?

According to the Scriptures, all of creation, including each of us, yearns for redemption. Why? Because we, like the imperiled koala and rabbit in the face of devouring flames, need it.

The 19th century Catholic cardinal, John Henry Newman, considered that humanity had been implicated in some terrible aboriginal calamity, a vast primordial catastrophe that knocked the creation out of joint with the purposes of its Creator. Barring a profound, cosmos-wide rescue, that “primordial catastrophe” set us on an inexorable path to destruction, just like the koala and the rabbit, had their respective redeemers not intervened.

If we are in the position of the rabbit in the news clip, headed straight for an apocalyptic demise – in our case, both spiritually and physically – then clearly, like characters in a Tolkien novel, we stand in need of rescue.

The good news is that there is rescue, and it, too, sounds like a story from a Tolkien novel. The rescuer is the Creator himself, who, out of devotion to his creation, assumed the form of one of us, and took the entirety of the “primordial catastrophe” of human failure upon himself, that we might be released from its terminal consequences. Tolkien thought of the story of Jesus Christ as a fantasy tale, with one crucial difference: he believed the gospel of Jesus Christ as rescuer-redeemer to be true. It was, he said, a story that has entered History and the primary world. (…) The Birth of Christ is the eucatastrophe of Man’s history, he explained.

The rescuer, arms outstretched, stands between the rabbit and the abyss, offering to save her. The rabbit surrendered to the rescuer’s mercy and found life in his arms. Will we?

This article was re-blogged on Clarion Journal of Spirituality & Justice on February 7, 2020.